The SMP industry exploded in 2012 when BRAVI’s Founder performed an SMP procedure live in front of millions of TV viewers. At that time, only three brick-and-mortar locations providing SMP could be found worldwide. Now, many years later, do-it-yourself Scalp MicroPigmentation kits are available on Amazon! The largest SMP companies are literally built on providing cursory 3-to-5-day training to an “affiliate”, following which they are dubbed a “location”. It is estimated that over 95% of providers receive less than 40 hours of training prior to performing SMP, unsupervised, on unsuspecting clients. This practice not only produces dreadful results, but it also poses health risks.

Having opened Pandora’s SMP Box so many years ago, BRAVI’s Founder developed laser correction and diffusion techniques specific to fixing SMP mistakes–and we remain the sole provider of these specialized services.

SMP done right looks amazing and is virtually indistinguishable from a shaven full head of hair. Ideally, hair loss sufferers would be spared the time, expense, and trauma of bad SMP results by finding an expert provider to perform their procedure. However, between photoshopped and stolen images, false claims of time in business and experience, paid endorsements on forums, and the general noise of the internet, it is extremely easy to fall prey. If you find yourself in this predicament–breathe–at BRAVI, we are here to help. We’ve helped hundreds of men from around the world to achieve the natural results they were hoping for, even after the worst case scenario has happened.

BRAVI is the Global Destination for SMP Correction. 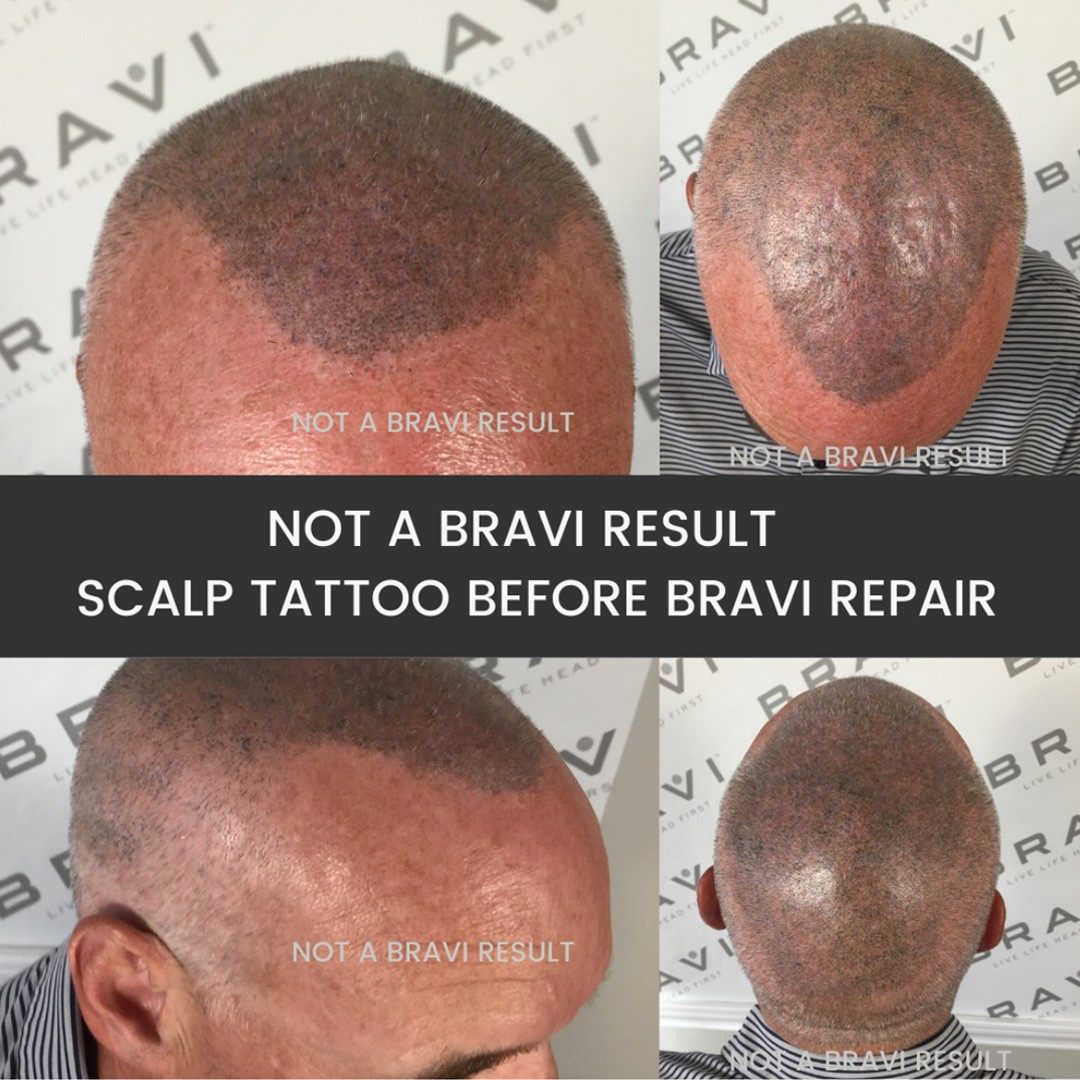 LOCATION OF SCALP TATTOO PROVIDER: BOSTON AREA
Background: Robert went to a provider of Scalp MicroPigmentation in the Boston Area when, during a consultation with his Hair Transplant Surgeon, his doctor advised him to get SMP from this specific technician. In actuality, he received a horribly unnatural-looking Head Tattoo from a Tattoo Artist with online training from a large SMP company. Here are his BEFORE pictures, when he arrived “post-Boston-SMP” at our BRAVI Specialty Clinic in Austin, Texas, for an SMP correction consultation:

Bad SMP Results? BREATHE…BRAVI can help. Robert is showing miraculous improvement. Here are some of his early results, after 3 laser diffusion sessions and 1 fully-healed corrective pigmentation session. Additional detail will result from his final enhancement. We are excited to see his transformation.

After receiving a Scalp Tattoo from a surgeon-recommended “SMP Provider” in Boston, this client traveled to BRAVI in Austin, Texas for specialized scalp repair. 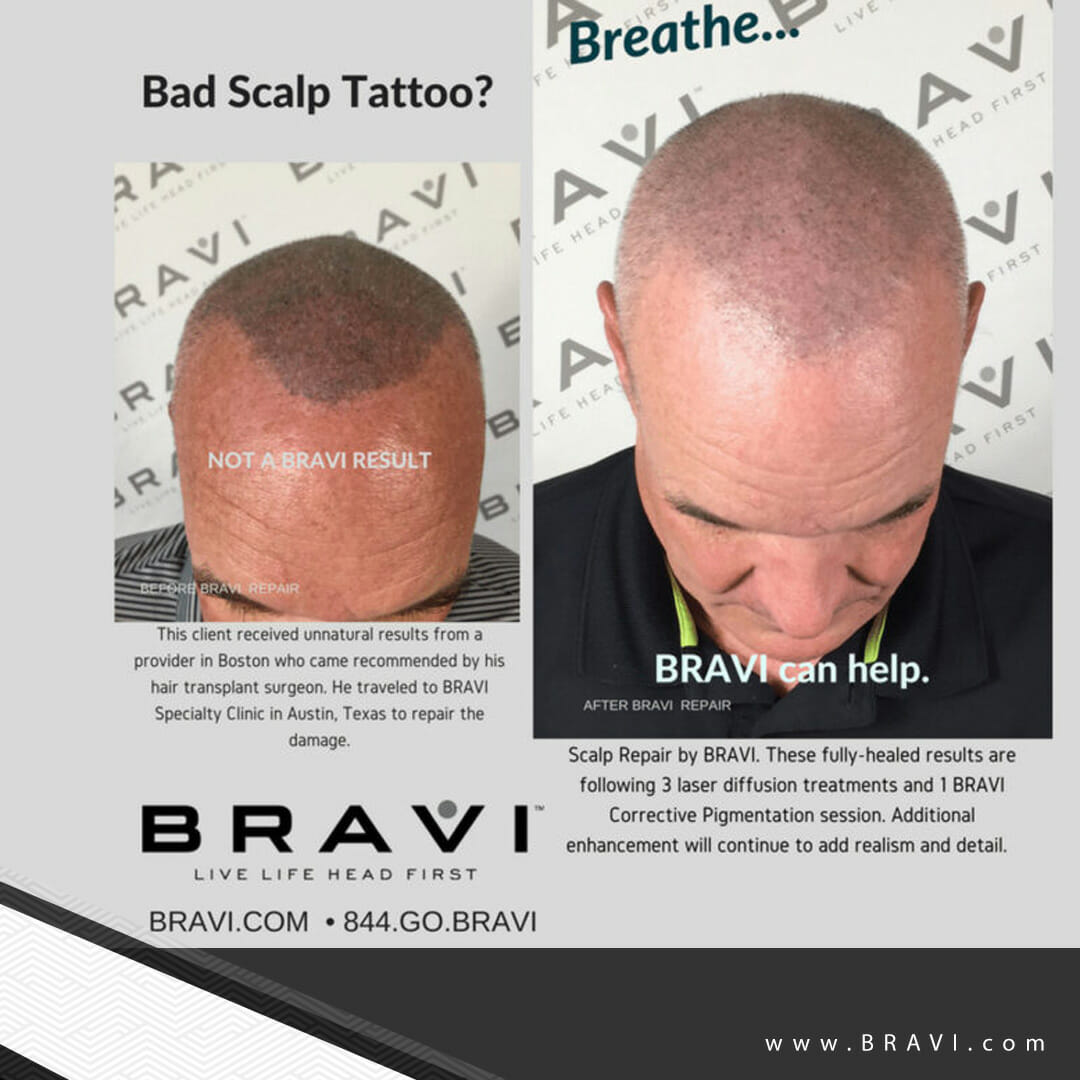 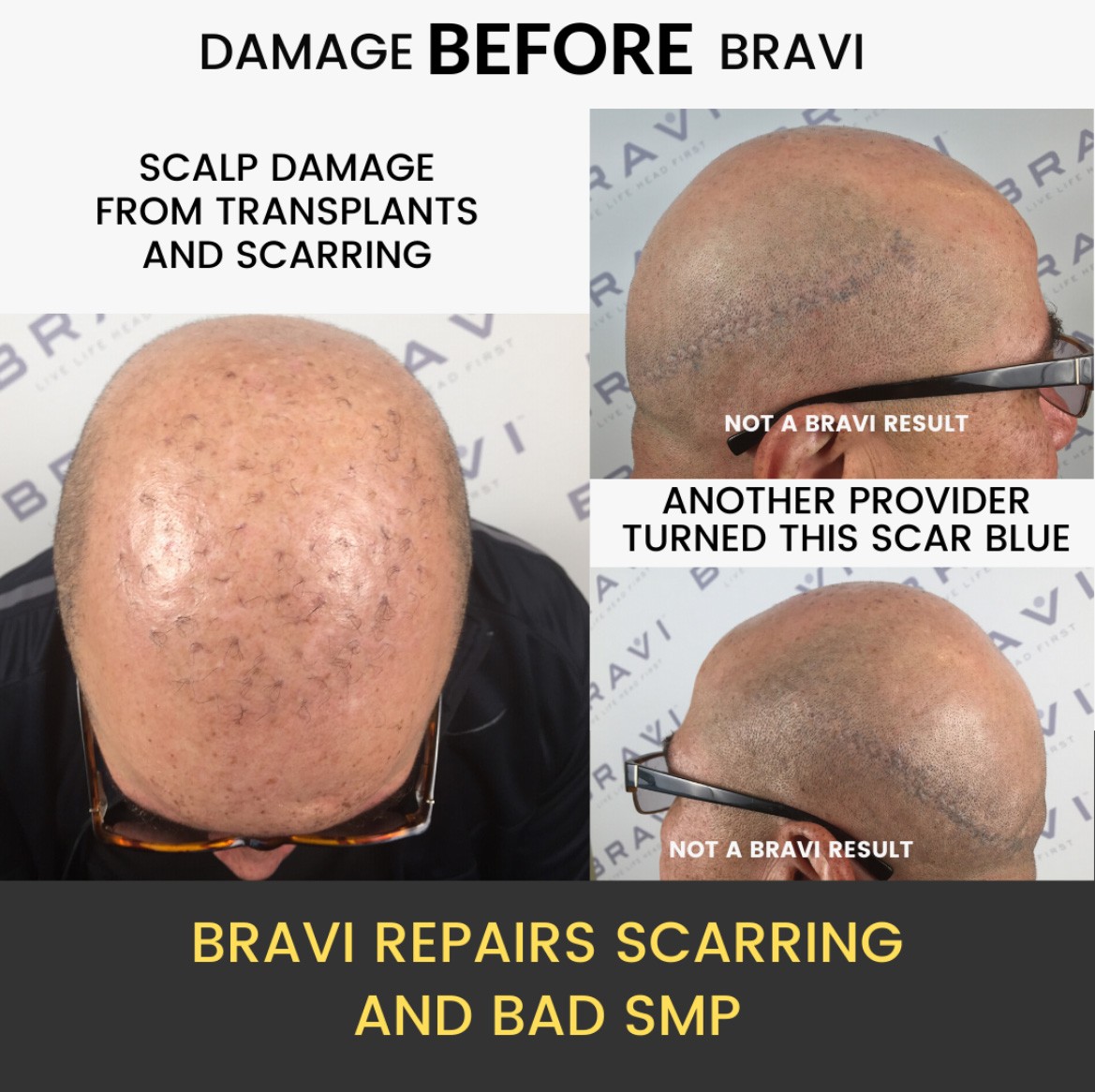 CASE STUDY: SAM
LOCATION OF SCALP TATTOO PROVIDER: KANSAS CITY
Background: Sam was assured by a permanent cosmetics provider in Kansas City that she could conceal his hair transplant scar. Instead, her head tattoo left him with a blue stripe around his head.

BRAVI was able to remove the blue pigment and conceal all evidence of his surgical history. 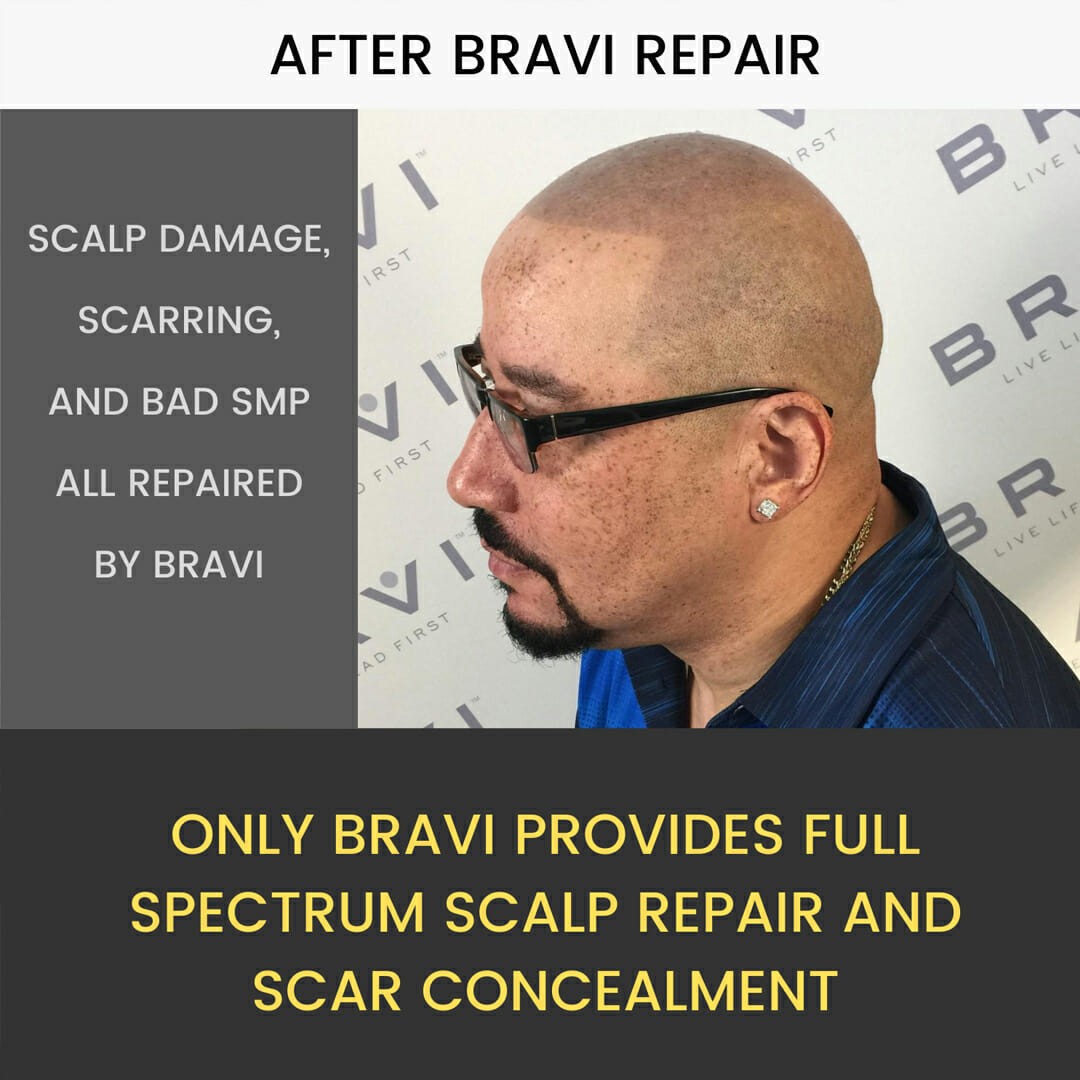 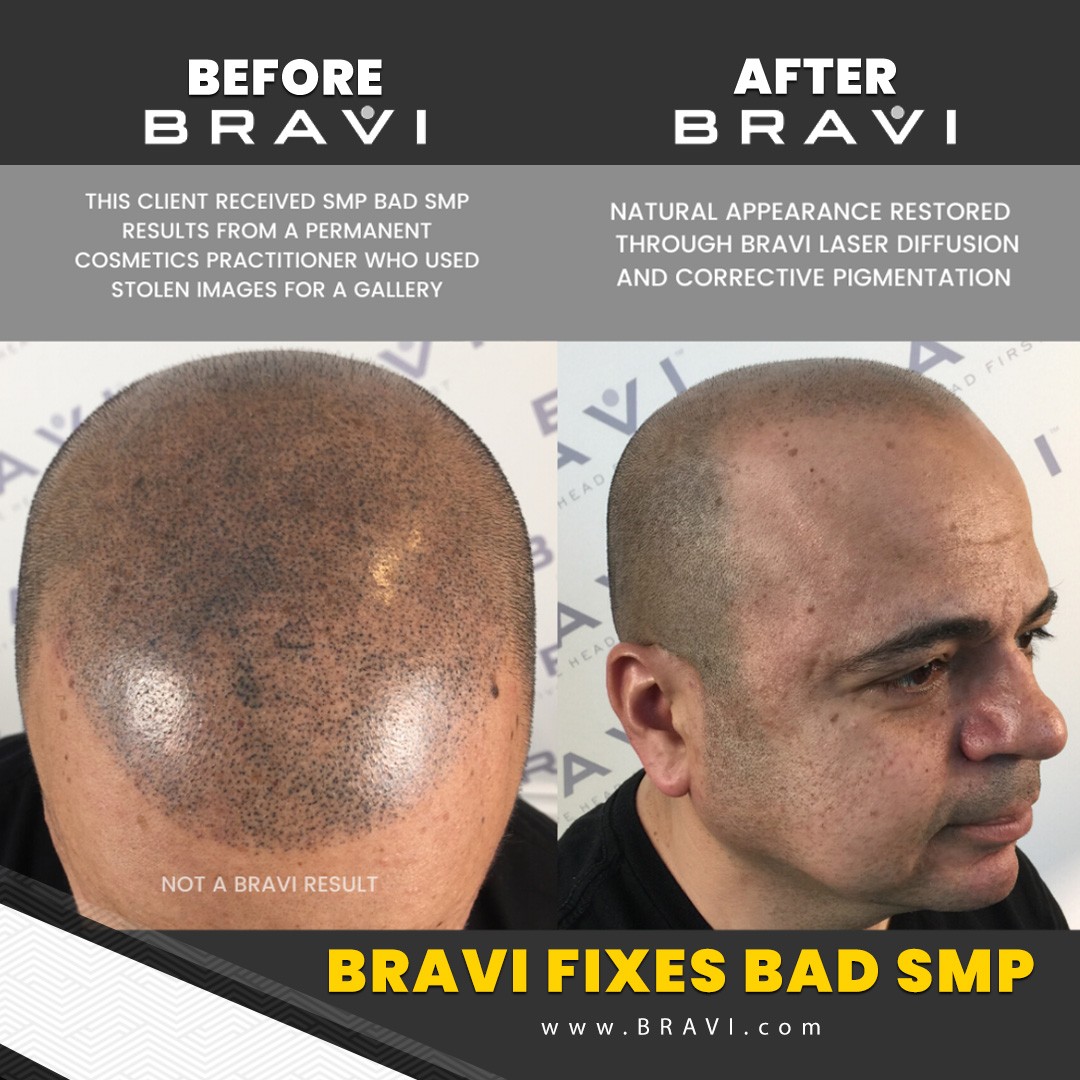 LOCATION OF SCALP TATTOO PROVIDER: TEXAS
Background: John responded to an ad for Scalp Tattoo published by a San Antonio area permanent cosmetics provider. Ironically, the images that this provider was using to promote her business were stolen images of the actual client that BRAVI’s Founder treated on Good Morning America. Be extremely careful when evaluating images posted by “Scalp MicroPigmentation Providers”. Image theft is rampant, and photoshopping is almost universal in web galleries. If your SMP provider can’t produce unedited photos that they, themselves, produced in their location, keep looking. Only experienced, reputable providers will have numerous unedited examples of their work. BRAVI does not photoshop procedure photos–EVER!

This client fell victim to a Texas provider who advertised experience and safety. BRAVI was able to restore a natural appearance through Laser SMP correction and Medical Corrective Pigmentation techniques. 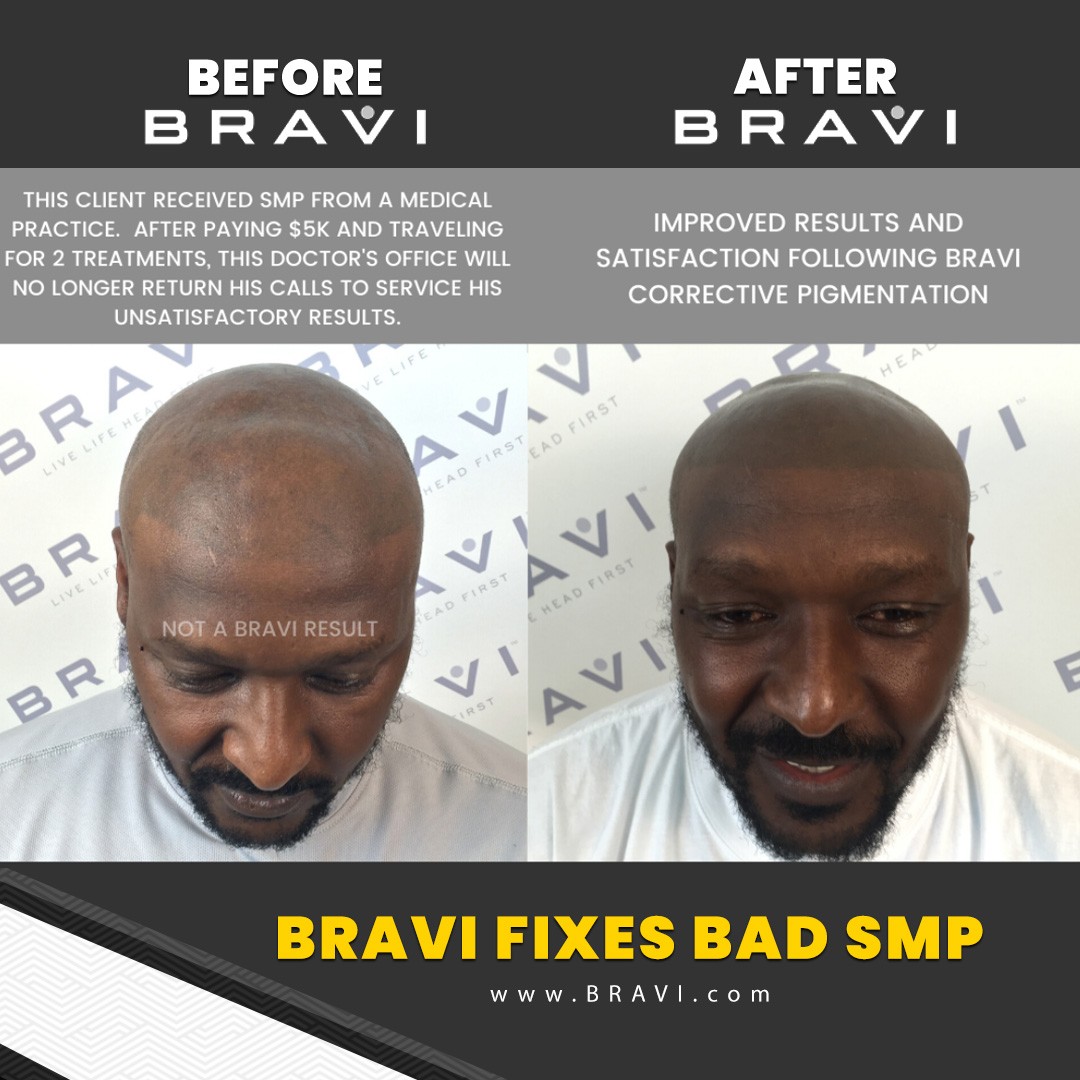 CASE STUDY: ABDUL
LOCATION OF SCALP TATTOO PROVIDER: TENNESSEE
Background: Abdul responded to an advertisement published by a Tennessee Hair Transplant Surgeon. He received blotchy, blue, totally unnatural looking results. After paying over $5k to this medical practice, they will no longer return his calls. He traveled to BRAVI Specialty Clinic in Austin, Texas to correct the Scalp Tattoo provided by this Tennessee Doctor. 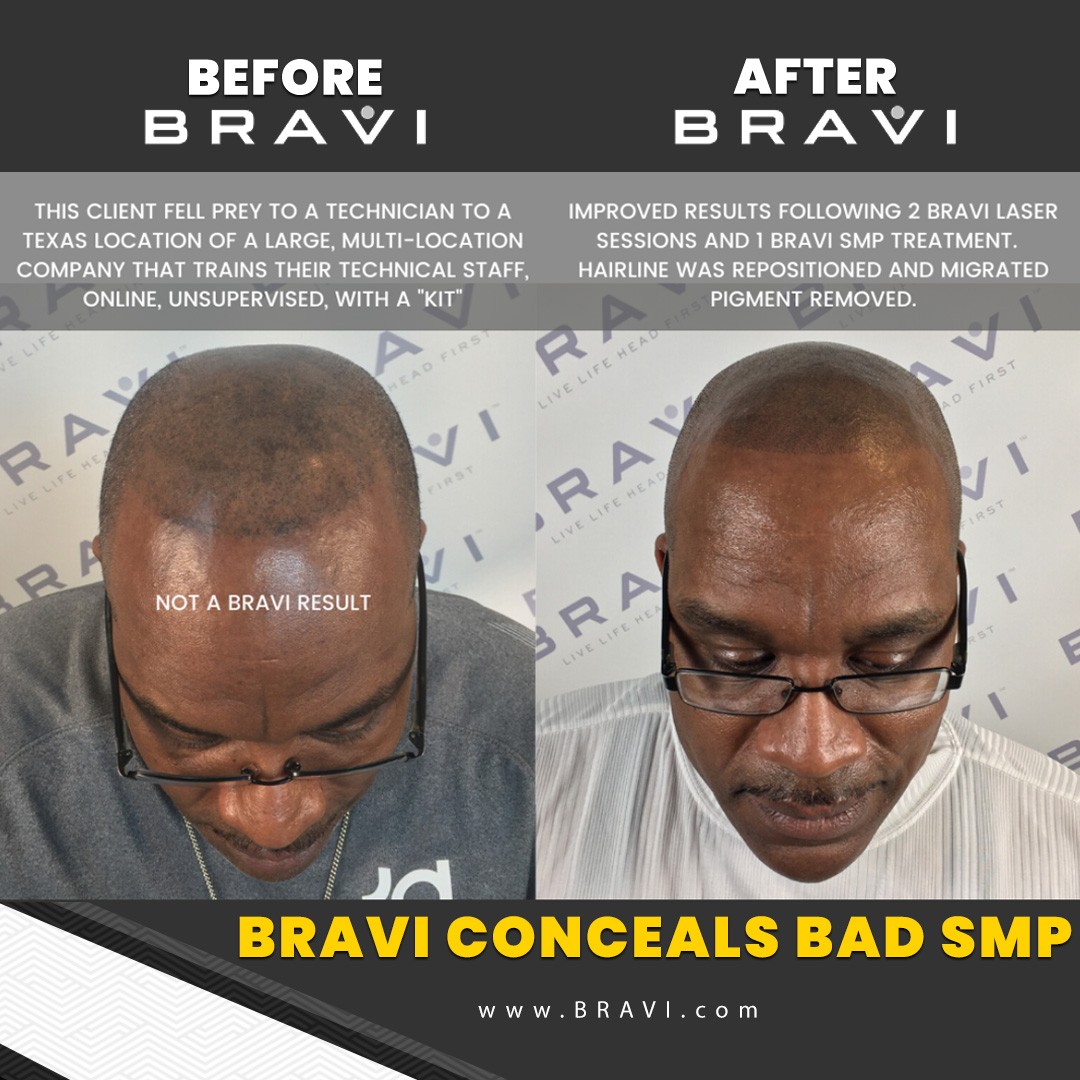 LOCATION OF SCALP TATTOO PROVIDER: TEXAS
Christopher fell victim to a large, multi-location company who creates “locations” by offering online technical training through a kit. This company has created an entire album of correction work for BRAVI. Be extremely careful when choosing a company with many locations. Quality control can only be achieved through extensive training, proper compounds and technology, and expert supervision–none of which are present in 99% of providers.

Wait no more. Click here to get in touch with us to schedule a Free Consult today!

"I'm finally seeing my hair as the redness leaves. It looks amazing I already feel more confident. In denial really as everything else I've tried has broke my heart, I keep thinking it's all going to fade away next week or something. But regardless I know I'm in good hands now. Thanks!"

"I hardly even think about my hair anymore it's been a real life changer so thank you Text received by the BRAVI Service Line from a BRAVI SMP client who had suffered for years with Chronic Telogen Effluvium (CTE)."

INTRODUCING BRAVI: THE COMPREHENSIVE AND STIGMA-FREE SOLUTION TO HAIR LOSS